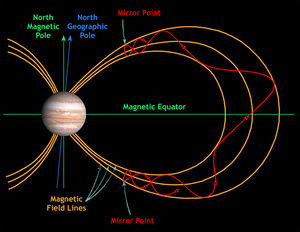 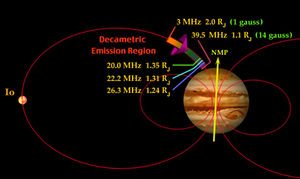 Origin of the different frequency emissions in Jupiter's magnetic field 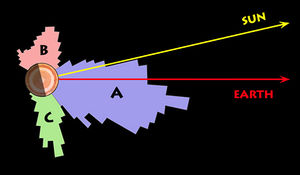 Jupiter's A-, B- and C type radio burst

The project is suitable for 1-2 practically oriented students with broad interests, who do not mind “getting their hands dirty” every now and then, in addition to the time spent in front of the PC.

Two types of radio noise emitted by Jupiter have been detected – synchrotron and cyclotron. The latter is strong enough to be detected by small antennas on Earth’s surface. Charged particles spiraling around Jupiter’s magnetic field lines near both magnetic poles (top figure) produce this cyclotron radiation. These shortwave signals are often referred to as DAM, since they fall in the decameter wavelength range. At these higher latitudes, where Jupiter’s magnetic field reaches as far out as Io, its field lines sweep rapidly past the ions and electrons shed into Io’s torus. This induces DAM radiation along the surface of the cyclotron cone (given in magenta in the middle figure). Jupiter’s DAM frequency reaches a maximum of 39.5 MHz near Jupiter’s cloud tops. At twice Jupiter’s radius the frequency is 3 MHz. Intermediate frequencies are created between these two extreme distances. Jupiter radiates two distinctive types of radio signatures in the DAM frequency range:

DAM radiation originates from at least 3 sources (A, B and C) that are fixed with respect to the planet’s rotating magnetic field. These sources are observed at around 20 MHz. They fall largely around one hemisphere (bottom figure). Source A is more than twice more likely to emit than either B or C. Jupiter’s magnetic storms depend on a combination of Io’s orbital position and the inclination of the respective radio source with respect to Earth.

The Radio Sky and How to Observe It - by Jeff Lashley

Preface and Table of contents

Chapter 4 - Beyond the Solar System