Difference between revisions of "Busy Box and related"

The Busy Box Hardware and Firmware is developed at the Department of Physics and Technology, University of Bergen. For questions and enquiries please contact Attiq Rehman and Kjetil Ullaland. 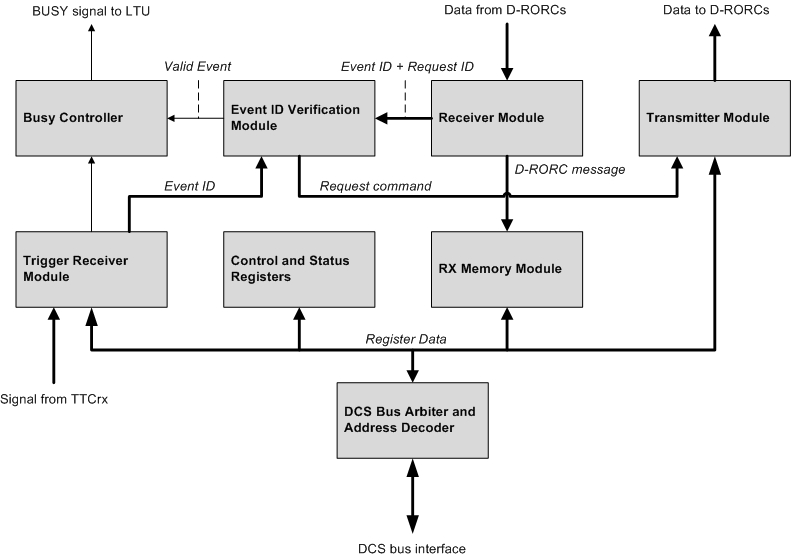 Triggers initiate data readout from ALICE’s sub-detectors and are received by the DCS board via an optical cable interface. The triggers and associated data are routed from the TTCrx ASIC on the DCS board to the BusyBox FPGA(s). Here, the L1a and Serial B line raw data is decoded by the Trigger Receiver firmware module.

The purpose of BusyBox is to let the Central Trigger Processor (CTP) know when the Fee’s buffers are full by asserting a busy signal which prevents further issuing of triggers. The BusyBox and D-RORCs receives a unique event ID from the Fee after an event. After a valid trigger sequence ends the BusyBox will ask the D-RORCs if they have received the same event ID as the BusyBox did. If they do not reply with the same ID it means data has not been shipped from the Fee to the D-RORC, hence, the buffer in the Fee still holds event data.

The Fee buffers can hold 4 or 8 events and the BusyBox keeps track of free buffers. The busy is asserted if the buffers are full.

Interaction with the BusyBox is done through the DCS board, either via Ethernet or UART.

The BusyBoxes are located in the DAQ counting room.

The BusyBox uses the Virtex-4 LX-40 FPGAs with the ff1148 package from Xilinx. Each device has 640 user programmable I/O pins that support LVDS 2.5 standard used to communicate with the D-RORCs. The Virtex-4 can run on clock speeds up to 500 MHz, store 18 kbits in 96 BRAM modules and has DCM to provide flexible clocking and synchronization.

In one of our labs at UiB we have a setup for testing new BusyBox firmware in hardware before releasing it. The setup features a full readout chain for one channel of the ALICE TPC.

See Also How to run the RCU - DRORC - Busybox setup

The busybox version number is now the same as the revision number of the source in SVN it was generated from. This should make it possible to get the original source files for any programming file. A register for the version number exists in the ctrl_regs module.

The serial decoder has been changed to reduce the resource usage. This module is replicated many times in the design so any improvement is significant. The old architecture used a shift register long enough to hold all bit-samples for one data frame (about 100 samples). The frame was captured in one go when a valid capture condition was found in the samples. The new architecture uses shorter shift register (about 10 samples) and only looks at a few samples at a time. Once the start condition is found it will capture the bits of the frame sequentially, bit by bit. The new architecture of this module has led to great improvements in resource usage. BusyBox firmware with 96 channels used to occupy approximately 96% of the FPGA. This number has been reduced to approximately 66%. Reduced resource usage makes it easier for the implementation tools to generate the programming file and it should also reduce the TDP of the device under operation.

The architecture of this module has been updated to make it more readable and to register inputs such as address and data from the DCS bus master.

Extra registers has been added:

A new feature has been added. The purpose is to prevent long bursts of trigger. A maximum number of triggers in a burst can be defined in the burst size register. A counter ("leaky bucket") counts up until a the maximum value is reached for every L0 trigger received. It counts down on pulses from a pulse generator until minimum (0). The interval of these "leak-pulses" is programmable from 0 to 200 ms in 10 us steps. We are busy when the "leaky bucket" is full. This feature can be disabled by setting the burst size to 0 (default value).

A new status bit has been added to the Busy condition register to indicate Burst Bucket Full as the reason for Busy State.

A new semi-multiple event buffer scheme is allowed. This allows a second event to be captured in the multi-event buffers even if sparse mode is enabled. Special care has to be taken to configure the number of buffers and the dead-time following the first of the possible two consecutive events.

A new registers has been added:

A new status bit has been added to the Busy condition register to indicate that two events happened, and are now being read-out.

The use of this feature requires proper setting of registers, as described in the following:

RCU firmware with the bug fix related to reading and writing the event FIFO has been tested and used at P2 for a number of test done to check the multi event buffer functionality. Erroneous behaviour of trigger receiver module is no more observed neither at P2 nor in the RCU - Lab.

The programmable time-out following the start of a trigger sequence now starts on L1A instead of Trigger module busy output (L0 trigger time-out).

DCS board firmware for BusyBox

The DCS board in the BusyBox uses special firmware. See Electronics for the TPC