Difference between revisions of "Electronics for the Time Projection Chamber (TPC)" 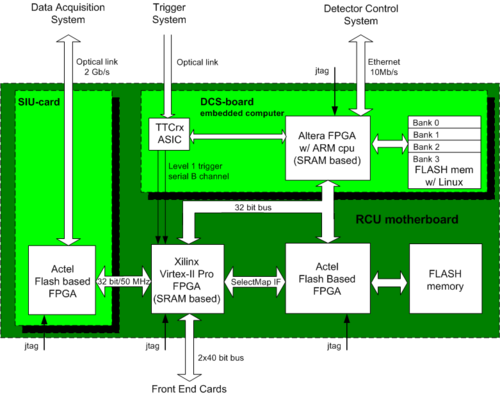 Sketch of the Readout Control Unit

DCS board firmware for TPC and PHOS 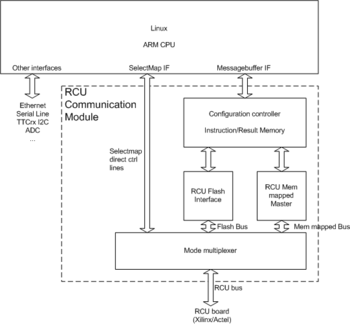 Schematic Overview of the DCS firmware for TPC/PHOS

Historically the RCU Communication Module only consisted of the Memory Mapped Communication Mode, but as the reconfiguration circuitry on the RCU board was designed, the need of using the bus lines in different ways arose. In addition to this normal communication path, two other ways to communicate is added, namely the RCU flash interface or the Selectmap interface of the RCU. There are several reasons for having these two interfaces on the DCS board

Update of the DCS Board Flash Device

There are two ways of updating the DCS board. The cards that are properly set up should read firmware version 2.6uib when logging in, if intended to use together with the RCU. For the Trigger OR and the BusyBox a special firmware has been made. This firmware is available here so in principle is possible to do the updates when needed, but if any questions, please don't hesitate to ask us. If you get cards directly from Heidelberg where they are produced, updates are needed if intended to use with TPC/PHOS.

The ways of updating the boards are given at the DCS page of Tobias Krawutschke. The important thing is that the .hex file is generated here in Bergen. It should be matching the board number written on the board with felt pen.

This is to be run on a remote linux system in the same network as the dcs system. "Srec cat" tool is mandatory. (Can be downloaded from the page of Tobias) The important thing here is that the DCS board needs to be running "correctly" in the first place to be able to do this. Correctly means that you have the network working seamlessly.</li>

Please note that these two ways update the complete Flash Memory, meaning the firmware, the boot section, the Kernel and the file system (the last way makes it possible to choose what part to update). This is sometimes mandatory depending on the firmware version - and it is a lot more "safe" since you then get the latest drivers and software etc...

As long as the driver is behaving correctly, these bugs will never cause any trouble. They are corrected in the source files, but as for now - a new firmware version will not be built.

Please note that the armboot.bin file is not supplied with version 2.7 as the Kernel MUST be updated as well. The hex file can be used together with the remoteupdate4.sh script in the following way:
./remoteupdate4.sh dcsflash_boardrev164_firmware2.7uib_dcs0031.hex <board IP/name> armboot | kernel
For detailed instuctions on using the remotesetup look here.

When using remotesetup one should also upgrade:

Please note that a different update script has been made for TPC RCU DCS. Contact Dag Toppe Larsen (dagtl at ift.uib.no) for questions.

The bin file can be used directly to change the firmware of the board. This can be done in the following way:

The firmware version is reported when starting the rcu-sh.

The sbi-file is used when building the complete DCS project. This should only be used by experts.

The Quartus project needs to be opened with a version of Quartus prior to 4.2, or else the Excalibur device is not supported.


DCS board Lattice CPLD-firmware for TPC and PHOS

The Lattice CPLD on the DCS board is in charge of controlling the clock distribution as well as the power regulators on the RCU board. A special design has been made by Venelin Angelov at KIP Heidelberg for use by the TPC and PHOS DCS boards. In this design, the default value of the vreg outputs are X"FFFFF7". This value makes the RCU power up together with the DCS board, as well as feeding a 40 MHz system clock to the RCU board.

To program the CPLD, a Lattice programmer that has the correct pinning to match the DCS board JTAG connector is needed. The ispVM System software is also mandatory. This can be downloaded from the Lattice Homepage.
To program it download the xcf file and the jed file from this site. Open the xcf file with ispVM System and make sure the link in the xcf file points to the location of your harddrive where the jed file is found. Then follow the instructions of the ispVM system software. 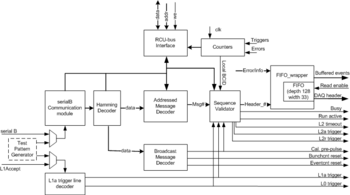 Triggers are used to initiate a read out of data in the TPC/PHOS sub-detector. The triggers and associated data are received on the DCS board from the trigger system via an optical cable interface. The receiver of the data is the TTCrx; an ASIC on the DCS board. The TTCrx chip is directly connected to the onboard FPGA on the DCS board. In addition, two lines – the L1Accept trigger and the serial B channel, are routed to the FPGA on the RCU board. The data on the serial B channel is the raw data coming directly from the Trigger System.

The onboard FPGA on the DCS board cannot be used to receive the trigger data, as it is sensitive to Single Event Functional Errors (SEFIs) because of the radiation environment. If a SEFI occurs in the DCS board FPGA valid events might be lost.

To prevent this, the Trigger Receiver Module is designed. This is a part of the RCU FPGA firmware, instead of using the internal TTCrx logic for this task. The Trigger Receiver Module decodes serial B messages and L0/L1 triggers. In this way, all sensitive data is decoded and stored in the FPGA of the RCU board, on which measures has been developed to prevent the failures due to radioactive effects (see RCU Auxilliary FPGA).

In addition, the Trigger Receiver circuit is to be used on the Trigger Busy Logic Board. The purpose of this board is to let the CTP know when the event-buffers on the FEE are full, i.e. that no more triggers can be accepted. The CTP will not send additional triggers as long as the busy signal is asserted.

Note 16.8.2007: Please note that there have been minor updates to version 1.1 so the Xilinx project contain a slightly different version than the source files does.
The differences are: - Possibility to select what events will be stored in the FIFO in the configuration registers by setting some mask bits
- Changed the readout speed of the FIFO so that it is possible to keep the read_enable high and new data will come on each clock cycle.
- Added read_counter as an output. This counter shows what word in the header is currently being read out by the FIFO.

All source files and more can be downloaded from the SVN database. 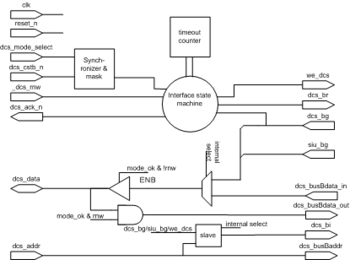 Sketch of RCU DCS Interface v0.2
The DCS interface is used to have a single interface towards the master module on the DCS board, hence transalating the extarnal asynchrounos bus protocol to a synchronous one internally on the RCU Xilinx.

One important feature of the DCS board firmware when used together with the RCU is to support three different modes of communication: Normal operation, Flash mode, selectMAP mode. The RCu Xilinx should only be active when in Normal operation, and the DCS interface must make sure that the ports from the Xilinx are not driven when other modes have been set. The DCS interface should ack all addresses except certain adresses that is used in the DCS fw and by the Actel device. 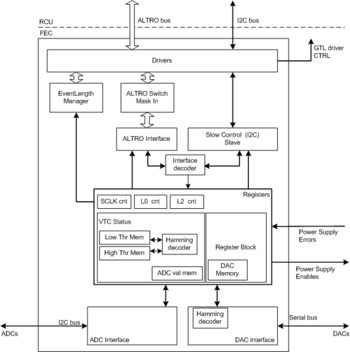 The Front End Electronics in PHOS is consisting of one Readout Control Unit (RCU) and 28 Front End Cards (FECs) connected to the RCU via two separate branches. On each FEC an SRAM based FPGA is situated – the Board Controller. Since the Front End Electronics is physically unavailable when PHOS is fully commissioned it must be possible to check the status via software during operation, and quickly respond to any error situation that might occur.

The purpose of the Board Controller is to read crucial values on the FEC, such as voltages, currents and temperatures. If these values exceed given programmable thresholds the RCU will be notified. If the severity level is considered to be potentially damaging to the board, the RCU will turn off the given FEC.

The PHOS FEC also includes a high voltage section. A very important functionality of the PHOS Board Controller is to set the bias voltage to the charge sensitive amplifiers located in the high voltage section. This must be done since the amplification of the APDs that are used for readout is varying from part to part. This variation is cancelled out with the setting of the DACs that are controlling the bias voltage.

This version of the PHOS BC is based on the TPC BC, adding the extra functionality needed for PHOS, and removing some features that are not needed. The basis for the code is the FMD version that is a VHDL implementation of the TPC BC with some modifications. Major changes have been done to this implementation to make the design more robust. 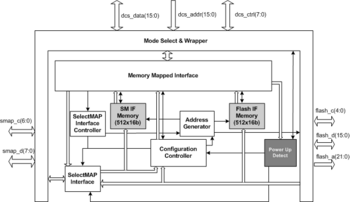 To deal with this task, the firmware on the Aux FPGA needs to be simple and efficient, as general as possible and most importantly; 100% working from the day of installation. With this in mind, as much workload as possible is handed over to the DCS board, making the operation of the firmware a bit more tedious, but much more configurable.

The only possible option to update the Actel Firmware is by using the JTAG connector on the board and the FlashPro Lite programmer, together with the flashpro software tool. Note that version 9.0 gives errors when trying to program the FPGA. Version 8.6 is the last version that works for the Actel on the RCU.
Download the correct version of stp file found on the download section, and start a new project in the flashpro software. Select the stp-file and choose action "program". Wait for a couple of minutes and the Actel should be updated. This can be verified by reading the version-number register.

When one cannot use rcu-sh to access registers after re-powering the RCU board there is no design for the Xilinx device stored on the RCU Board Flash Device. When powering up the Actel device will immediately start to try and configure the RCU Xilinx. If there are no files in the Flash Device this will fail and the Xilinx will remain braindead.

To configure the flash device you will need a recipe, rcuflashprog tool for upgrading the flash Contents, and the bit file you want to use. Please download the first two here: "User manual for Firmware version 1.3" and "rcuflashprog.rar". The recipe is found in the usermanual under chapter 5.1.1. Please be aware that you should NOT choose to enable scrubbing. (Read the full documentation if you are curious what this is)

The rcuflashprog tool is available with configuration files in the rcuflashprog.rar package. This should be copied to a location on the DCS board (or on a mounted network share preferably) and the rcuflashprog file itself should be executable. The bit file for the Xilinx is found at: CERN EP-ED ALICE TPC.

Be aware of the following

Three software tools has been developed by Dominik Fehlker (dfehlker at HTWM.De) for operating the Actel Firmware and the onboard Flash Memory of the RCU. These tools are small command-line tools that does different tasks:

Detailed instructions on how to use the tools is found in a README file in the tar-archives. The tools should be run on a mounted folder on the DCS board. These tools will eventually be integrated in the FEE server.

More information on how to use frame by frame reconfiguration to be added.

Updates of these tools will come in the near future.

For assosiated information concerning software and software tool download section, go to: The Actel software device in the FeeServer CE