Antipsychotic agents are essential in the treatment of schizophrenia and important supplements in the treatment of other serious psychiatric disorders. While effectively alleviating psychotic symptoms, these agents have serious adverse effects complicating their use. Older, so-called first-generation, agents induce distressing motor symptoms. Modern (second-generation) drugs are known to severely increase the risk of metabolic side effects such as increased food intake, obesity, dyslipidemia, and type 2 diabetes (1). Weight gain is generally believed to be caused by increased food intake; however, recent studies have indicated that some metabolic adverse effects, such as dyslipidemia, may occur independent of weight gain (2). 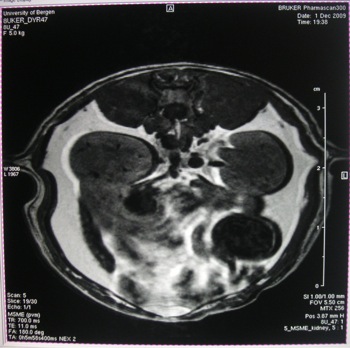 Figure 1. Screen shot of T1-weighted multi-spin multi-echo (MSME) image showing transverse section through the abdomen of a female rat treated with an antipsychotic drug for 6 weeks. The kidneys are easily identified, and are surrounded by adipose tissue (white). Images are respiratory triggered to avoid respiratory artifacts.

Moving from experiments in cell culture to animal experiments, we have performed both acute and chronic experiments in rats. An important issue, as mentioned above, is whether dysmetabolic features other than weight gain may develop in the absence of increased body weight. Manipulating animal models by altering parameters such as food intake, thus controlling weight gain, may shed light on such issues. Other fields of interest are gender-specific drug effects in rodents and mechanisms underlying increased food intake. Imaging techniques will be valuable in characterizing the metabolic phenotype of our animal model.