The Norwegian Climate Prediction Model (NorCPM) is aiming at providing prediction from seasonal-to-decadal time scale. It is based on the Norwegian Earth System Model (NorESM, [1]) and the Ensemble Kalman Filter (EnKF, [2]) data assimilation method. NorESM is a state of the art Earth system model that is based on the Community Earth System Model (CESM, [3]) but uses a different aerosol/chemistry scheme and ocean model (evolved from MICOM). 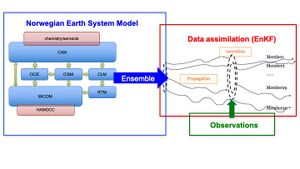 The EnKF is a sequential data assimilation method that allows for fully multivariate and flow-dependent corrections using a covariance matrix produced by a Monte-Carlo ensemble integration.

FREE: refers to an ensemble simulation of NorESM carried without assimilation and starting from the same initial ensemble than the assimilation experiment. The initial ensemble is generated by spinning up an ensemble of states (sampled from a long preindustrial forcing run) with real historical forcing from 1850. Such an experiment provides a benchmark for data assimilation and is also used to disentangle the part of prediction skill related to natural internal variability from the part driven by external forcing.
Version 0 (V0): refers to version of NorCPM that assimilates SST only. SST is the only observational dataset available in the ocean for a period of time sufficient (> 100 years) to clearly demonstrate the skill of decadal prediction. Assimilation updates vertically the full ocean while the remaining components of the Earth system model (atmosphere, sea ice, land) are left unchanged but they will adjust dynamically between the monthly assimilation step (an approach referred as weakly coupled data assimilation).

V0 was first tested in idealised twin experiment (Counillon et al. 2014). It is found that assimilation reduces error and can constrain well the variability of the ocean – with the largest improvements in the near surface and sea ice with some benefit over land for temperature and precipitation. The system beats persistence forecast and shows skill for the heat content in the Nordic Seas that is close to the upper predictability limit.
V0 was tested in a real framework and a long stochastic reanalysis was produced for the period 1950—2010 which assimilates the anomaly of the HadiSST2 within the period 1950-2010. HadiSST2 provides a stochastic reconstruction of SST - that is, providing a three-dimensional estimate of the measurement and its accuracy - for the period 1850-2010. A method referred to as upscaling (Wang et al. 2016) is used to ensure that the assimilation does not introduce a drift when updating the non-Gaussian distributed layer thickness variables. The system can reproduce well the North Atlantic variability and shows good agreement with the independent objective analysis of the oceanic heat content and salt content globally. It was noted that using a flow-dependent data assimilation method and formulating the ocean covariance in isopycnal coordinates are an important ingredient for efficiently propagating the surface information below the mixed layer in the Labrador Sea and to constrain the formation of deep water convection.
In Wang et al. (sub) hindcasts are started from a shorter reanalysis (started in 1980) reanalysis. The system shows highly competitive skill compared to North American Multi-Model Ensemble and skillful skill for sea ice extent was variability is driven by ocean variability (e.g. in the boreal winter in the Barents Sea, the Labrador Sea and Greenland Iceland Nordic Seas). The skill of decadal hindcasts was tested for 1955:2010. There is some skill for prediction of AMO and AMOC at 26 but the prediction of the SPG is poor despite a very good match during the reanalysis. Bethke et al. in prep1 identified that the reason for the poor forecast is a combination of poor initialisation of the deep subtropical water temperature and near-surface salinity in the SPG region.

Version 1 (V1): the system is complemented with the assimilation of hydrographic profiles. Assimilating observations in an isopycnal coordinate model is not straightforward as the observation operator must interpolate either from isopycnal coordinates to z coordinates or vice versa. In Wang et al. 2016 it is shown that the approach to interpolate the model onto z coordinates (still keeping the covariance in isopycnal coordinates) is more linear than interpolating the observations to isopycnal coordinates and as such more efficient. Practical implementations of localisation and the representation error were extensively tested and V1 has been run with an optimal setting. The system is shown to be able to constrain well the error in the interior while being reliable. The performance of the prediction was tested for the period 1980-2017 in the real framework with anomaly assimilation. While complementing the system with hydrographic profile yields little benefit on the seasonal time scale, it greatly enhances the skill for decadal predictions in the SPG region (Bethke et al. in prep1). There are currently different version of V1. In V1a, all ocean observations are kept and we do not update the sea ice compartment during assimilation. In V1b, we reject observation if it is located in places where there is ice. In v1c all observations are retained but the error for hydrographic profiles is inflated by a factor of 3 in sea ice covered region because there is large uncertainty for the climatology there (with anomaly assimilation). We also update the sea ice compartment (strongly coupled DA). Most difference between v1a, v1b, and v1c is in sea ice covered region and v1c is performing best there. V1c and v1a will be used for CMIP6 DCPP.

Version 2 (V2): the system is complemented with assimilation of sea ice concentration. In Kimmritz et al. 2018, we tested different implementations of the data assimilation system in an idealised twin experiment. It is shown that a joint update of the ocean and the sea ice state during the assimilation is beneficial (strongly coupled data assimilation) with a flow-dependent covariance method. It is also strongly beneficial to include the different thickness categories in the state vector. Assimilation is able to constrain well errors in sea ice and in the near-surface ocean. The method is tested in the real framework in Kimmritz et al. in prep. The system show reduced error for sea ice thickness. Prediction of sea ice extent are also greatly enhanced in many regions were sea ice yields predictability.

High-Top: the system is developped for subseasonal-to-seasonal(S2S)prediction Li et al. 2019. In this version, the atmospheric component (normally the CAM model) is replaced with the Whole Atmosphere Community Climate Model (WACCM) version 4 (Marsh et al., 2013). WACCM extends vertically into the mesosphere‐lower thermosphere region (up to 5.9 × 10−6 hPa, approximately 140 km). In addition, it incorporates an interactive stratospheric chemistry package and a parameterization of orographic and nonorographic (convective and frontal) gravity waves. A 30-year set of coupled S2S hindcasts were made with initialised atmosphere, ocean and land components to examine the role of snow cover initialisation in wintertime predictions through a stratosphere-troposphere coupling. A twin hindcast set with scrambled snow initial conditions was also made to determine the skill increment.

For each of the NorCPM version the assimilation are either carried using full field assimilation or anomaly assimilation. In full field assimilation the observations are assimilated as they are. An advantage of that approach is that it constrains the model bias, but there is a risk that models are attracted to their bias climatology. In such a case, the redundant corrections will transfer the bias from the observed variables to the non-observed variables via the covariance during assimilation. In anomaly assimilation the anomaly of model and observation are calculated from their respective seasonal climatology before they are compared. As a consequence, bias is left as they are and we aim only at synchronising the variability. This approach also has some drawback as bias in the mean state comes with a bias in its variability (for example with the classical bilocation of the Gulf Stream). Carrassi et al. 2014 details the advantage and inconvenient of both approaches.
Dr Barthelemy is currently investigating a suites of computationally cheaper data assimilation method than the standard EnKF. The first one is the Hybrid EnKF-OI which combine the dynamical covariance with stain covariance from a long 300 year pre industrial run. The second one seeing the Dual-resolution EnKF in which the covariance of the system at two resolution are combined for the data assimilation step. The combined EnKF-OI and Dual resolution EnKF are also tested. The EnOI is also considered as one of the benchmark in which covariance are constructed from a long pre industrial run.

NorCPM is contributing to the WMO Lead Centre for Annual-to-Decadal Climate Prediction under the name BCCR. We intend to contribute to CMIP6 DCPP.

All the code for running the system is available on GitHub. The repository is private so please request to an account to access it. [https://github.com/BjerknesCPU/NorCPM]

Following is a table that summarise the different experiment runs available so far:

All data are available on Norwegian storage facilities NIRD norwegian . All path below are given relative to the path /projects/NS9039K/shared/norcpm/cases/NorCPM/. If you have access to NIRD but not to NS9039K contact Noel Keenlyside or Ingo Bethke otherwise contact the person with relevant expertise as detailed in the Contact information section.